Looking for a day trip from Bath Somerset? Here’s 11 charming towns to visit about an hour’s drive away that can easily be added to your vacation plans.  Ever wanted to explore the counties of Somerset and Dorset but weren’t sure where to go? Let me take you to some of my favorite towns and you’ll see why they’re worth the drive!

Even if you’re traveling by train, don’t despair; you can still do a day trip from Bath. I’ve noted the towns with train stations and connections to Bath Spa railway station. Be sure to get my inside skinny on train travel in England before you go!

The Kennet-Avon canal on a fall day

This pretty town is a mini Bath that sits astride the River Avon and the Kennet-Avon canal. These ancient waterways weave through town creating a tranquil vibe with swans, paddle boarders and even the odd kingfisher to spy. The town’s origins can be traced back to Roman times and local buildings echo the golden stone of Bath.

One of my favorite walks is along the canal towpath which is a few steps from the train station. With pubs along the canal and narrowboats to gaze at and admire, Bradford on Avon is the perfect family outing if you’re craving a little nature escape away from the crowds.

What to see and do in Bradford on Avon

Book a train to Bradford-on-Avon 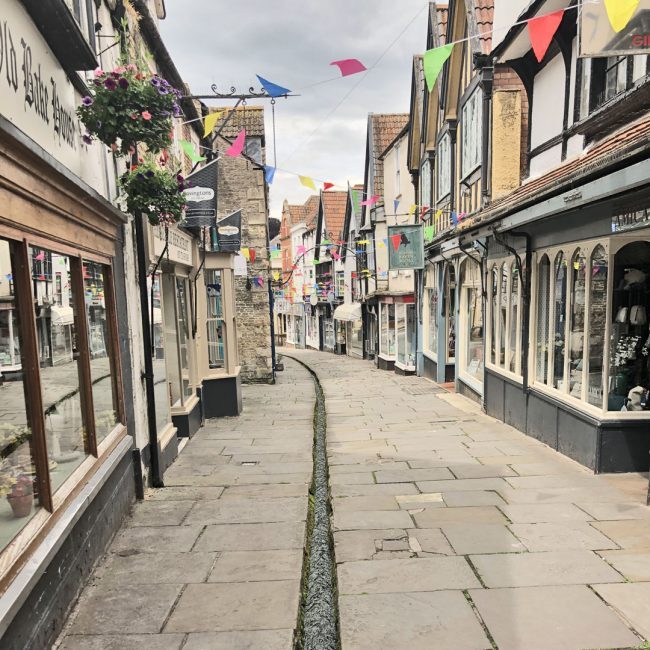 Frome’s been called the Shoreditch of Somerset for it’s arty slightly gritty vibe a la London’s East End. But the town is best known for the massive monthly Independent Market that rocks up on the first Sunday of every month (except January and February).

Straddling the River Frome, the town meanders on either side of the river but the highlights are Catherine Hill, Cheap Street and Gentle Street which are all off the main town market place.

What to see and do in Frome

Book a train to Frome

Less than 4 miles from Frome, Nunney is a small village primarily known for it’s historic moated castle with ruins dating to the 14th century. Picturesque and small it’s the perfect spot to spend a lazy afternoon walking or having a drink at the picnic tables by the stream in front of The George pub.

Also less than 4 miles from Frome, Mells is another pretty small village for a lazy afternoon. During spring and summer visit the Walled Gardens at Mells and enjoy tea, a pizza or light lunch outside in the garden.

For a more formal meal, The Talbot Inn is the perfect spot to have Sunday roast lunch or an afternoon drink. Walk off your lunch with an easy stroll around the village loop.

Wells is best known for Wells cathedral and has city status as a result. But as it’s the smallest “city” in England, be prepared for a walkable town centre. Wells was listed in the Domesday book of 1086 and the Cathedral dates to the 12th century.

The Bishop’s Palace and Gardens next to the cathedral features a 13th century palace with moat, bell ringing swans plus 14 acres of gardens including the spring from which Wells is named.

What to see and do in Wells

Glastonbury is famous for the legendary music festival which takes place each June as well as Glastonbury Abbey founded in the 8th century and Glastonbury Tor just outside of town.

Glastonbury was one of the sites where King Arthur was rumoured to be buried and the town has taken on it’s own unique personality full of mysticism and alternative energies. If you’re looking to channel your inner sixties, you’ll find shops full of crystals, incense as well as colorful characters seeking spiritual enlightenment and sprinkling magic.

What to see and do in Glastonbury

Street is a small town about a 10 minute drive from Glastonbury which is home to Clark’s Village an outdoor shopping mall. You’ll find outlet type prices or at the very least something last season you can’t live without at a good price. The best stores in my opinion are the huge Clark’s shoe store, Superdry, Jack Wolfskin, Barbour and Timberland.

As with Frome, Bruton now has it’s own London themed moniker “the Notting Hill of Somerset”. For a small town it manages to project both hip and unassuming vibes. All the good stuff is along the main street A359 or High St. Overlooking town is the Dovecote, an enigmatic tower you can stroll to when you want to stretch your legs.

But just on the outskirts is the fabulous Hauser + Wirth; a gallery, slash garden slash farm shop and restaurant with snappy bar.

What to see and do in Bruton

Book a train to Bruton

For a small town Somerton has a lot going on, a bit like Bruton. It’s a small village which actually gave its name to the county of Somerset around the start of the 14th century.

If you’re in the area visiting the Fleet Air Arm Museum or Haynes Motor Museum, it’s definitely worth popping in for a browse and a bite. I was most impressed with our dining options which isn’t always the case, as I can be picky!

What to see and do in Somerton

Shaftsbury is best known for Golds Hill, that quintessential steep cobbled street featured in the vintage Hovis commercials and now a popular Instagram spot. The town is sprinkled with lots of independent shops and worth a quick nosy if you’re passing nearby.

Just on the outskirts of town is Dairy House Antiques, a two story house stuffed to the rafters with some very tempting finds. Bundle up though, it can be frigid viewing!

Shaftsbury isn’t too terribly far from Stourhead gardens and house so you could swing by and do both.

What to see and do in Shaftsbury

Sherborne has become one of my favorite towns to meet up with Dorset friends. There’s a bustling high street (Cheap St) with many engaging independent shops to browse along its quirky medieval facades.

Sir Walter Raleigh built an Elizabethan mansion in 1594 which is now known as Sherborne Castle. The brothers of King Alfred the Great are buried at Sherborne Abbey. It’s just a good size town to find something for everyone to do; shop, browse, walk and eat!

What to see and do in Sherborne

Book a train to Sherborne

Eat | Drink: The Plume of Feathers pub, Olivers for coffee, The Green pub

There you have it, my recommendations for the best day trips from Bath Somerset or from anywhere in the southwest corner of England. While you’re in Bath, be sure to check out my shopping guide to Bath as well as my recommendations for what to see and do while you’re there! If you’re planning a visit don’t forget to read my latest tips on traveling from the US to the UK.

Moving on When You’re an Extroverted Introvert