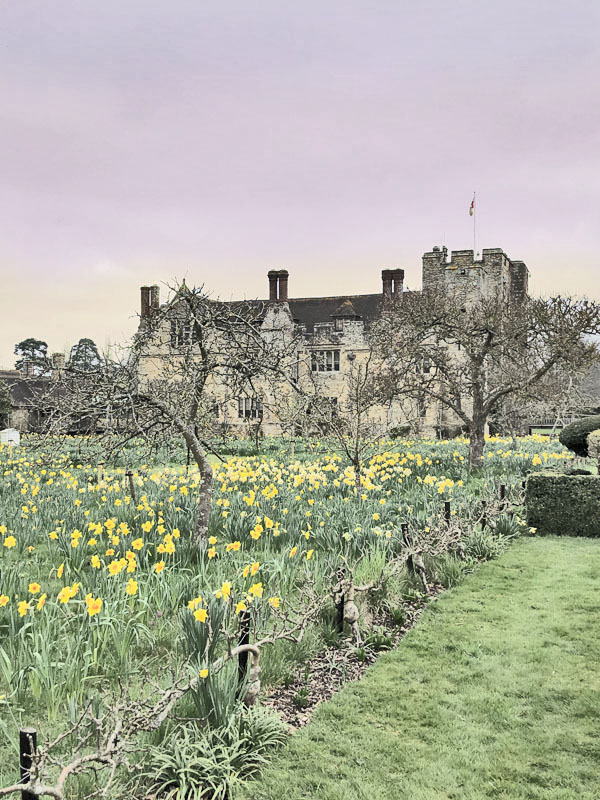 Visiting Hever Castle in Kent on a Day Trip

Even on this chilly day in March a brilliant carpet of daffodils lights up the grounds of Hever Castle with sunshine. Unlike any other castle I’ve seen in my travels so far through England and Scotland; instead of forbidding thick stone walls and cold drafts, you’ll find small rooms cozily furnished with nary a suit of armor in sight. Dare I say it’s a very feminine castle and rightly so. If you’re wondering is Hever Castle worth visiting, the answer is a resounding yes!

Anne was born in 1501 nearby and then moved to Hever in 1504 when her father inherited the castle. From 1513 – 1522 she was sent to live in France before returning to join Catherine of Aragon’s royal household in England. During this time her sister Mary had become King Henry’s mistress right under Catherine’s nose. But young Anne had fallen in love with Henry Percy and was banned from the castle and sent back to Hever.

But then in 1527 Anne started receiving love letters from non other than the wayward king himself and in 1533 they were secretly wed after his marriage to Catherine is “annulled”.  Anne gives birth to Elizabeth later that year. But by 1536, unable to produce a male heir, she’s convicted of infidelity and cruelly beheaded without having reached her 30th birthday.

Her daughter however proved to be more of a survivor. She became Elizabeth I, the Virgin Queen and reigned on the throne from 1558 until her death in 1603. 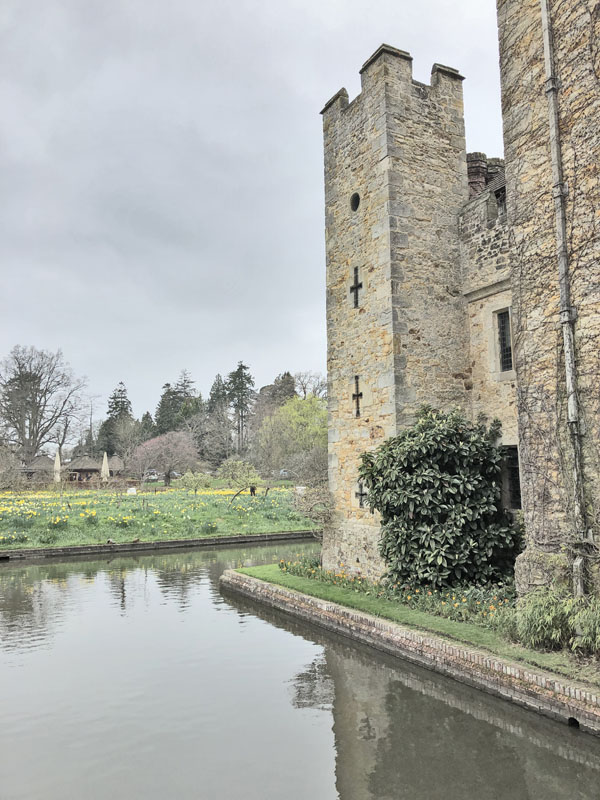 View from the drawbridge across the moat

The History of Hever Castle

So now you know the most famous occupant of the castle, but did you know another famous American family purchased and restored it?

Hever castle was originally constructed as a hall in 1271 and over the centuries was gradually added on to. By the 16th century, Anne’s father built a ceiling over the great hall thereby creating the Long Gallery spanning it’s whole width. In the 17th century the wooden drawbridge over the moat was replaced by the stone bridge you see now. Quite the Fixer Upper!

In July 1903, it was the American millionaire William Waldorf Astor who purchased Hever Castle and embarked on an ambitious repair and restoration of the castle and grounds. Astor became the richest man in America when his father died in 1890 and moved to England with a fortune of $100 million. He poured his love of art and culture into renovating Hever Castle to the highest standards available. The budget for the restoration was believe to be in excess of £10 million, a fortune in any era. Everything from door locks to windows were replaced or repaired to replicate the materials of the original 16th century building. For eighty years, American royalty lived in and owned one of Britain’s finest landmark castles.

Then in 1983, the Guthries a family from Yorkshire, purchased the castle from the Astors  and own it to this day.

What to See at Hever Castle

With so many different areas to explore, if you have only a few hours to visit, I’d focus on the castle and the gardens. You can choose several levels of admission, but both castle and gardens are a must to get the full flavor of Hever’s history both old and new.

Visit the castle first to get a feeling for who’s lived here over the centuries. Although some areas are closed off to the public, you’ll be able to enter the Inner Hall, see the beautifully warm and cozy Drawing Room as well as the Long Gallery and Anne Boleyn’s bedroom. Be aware there are some twisty stairs to climb to see these two rooms along with King Henry VIII’s bedchamber where he was rumored to stay whilst courting Anne. 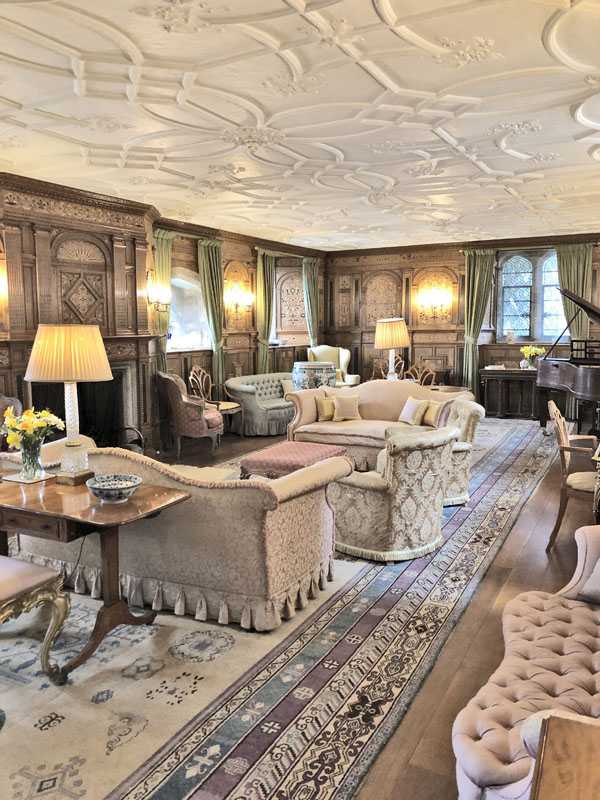 What impressed me most was the incredibly intricate woodcarving and ceiling details, all a result of the extensive restoration by William Astor.

Don’t miss the Astor suite and children’s rooms to get a glimpse of the eight decades they were in residence. 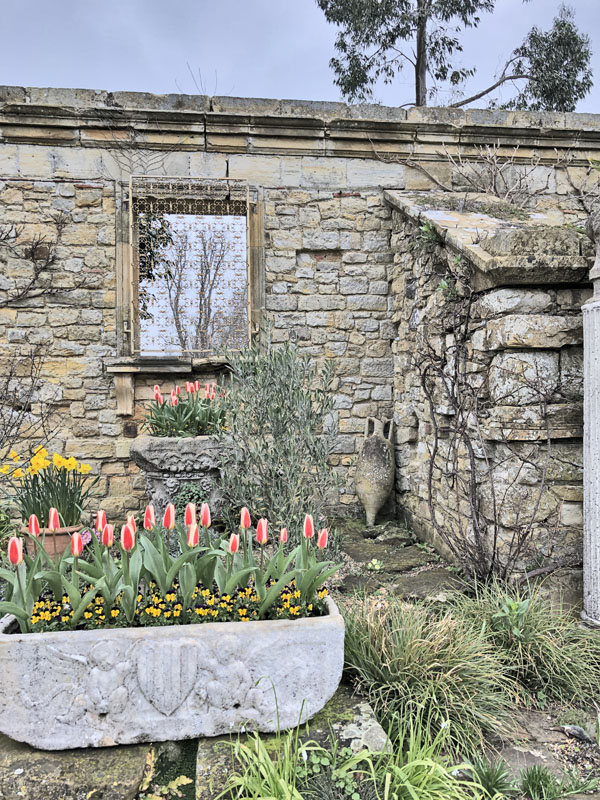 Even on an overcast and chilly day, the gardens are well worth visiting. I can only imagine how stunning they are in full bloom but even on this gloomy spring day, touches of brilliance and color are everywhere.

William Astor was inspired by his time as Italian interior minister to replicate an Italianate style formal garden at Hever complete with centuries old sculptures. Facing the lake is an ornate sculpture inspired by the Trevi fountain of Rome.

The Rose Garden, Tudor Garden and Blue Corner are a feast for the eyes at any time of year and if you’re an avid gardener you won’t want to miss these award winning gardens.

What Else to Know about Hever Castle

You’ll find Hever is run much the way any National Trust or English Heritage property is. There’s two cafes on the property so you can get a bite to eat or cup of coffee or tea. The Moat restaurant is just inside the main entrance. The Guthrie Pavilion cafe is situated on the right next to the Rose Garden before you get to the lake. Fancy an afternoon tea? You can have that too.

The large gift shop is just beside the main entrance, and is also home to the Miniature Model House exhibit tucked in behind all the kiddie costumes and toys. Your grandkids will love it!

If you fancy staying at a castle, you can. Or at least the next best thing. Luxury bed and breakfast accommodations are also available, in the historic buildings just behind the castle.

I’ve only touched on the delights of this gorgeous historic home. There are special events throughout the year as well as a stunning golf course, so be sure to check out all of the amenities and attractions available. What really impressed me was attention to detail. This family run estate caters to all ages. From a huge play area for children to golf and luxury amenities for adults. You could easily spend days here and not run out of things to do!

Here’s an interactive map of the castle and grounds to plan your visit. Allow at least two hours or more to fully appreciate the castle, grounds and gardens. Just don’t get lost in the Maze! 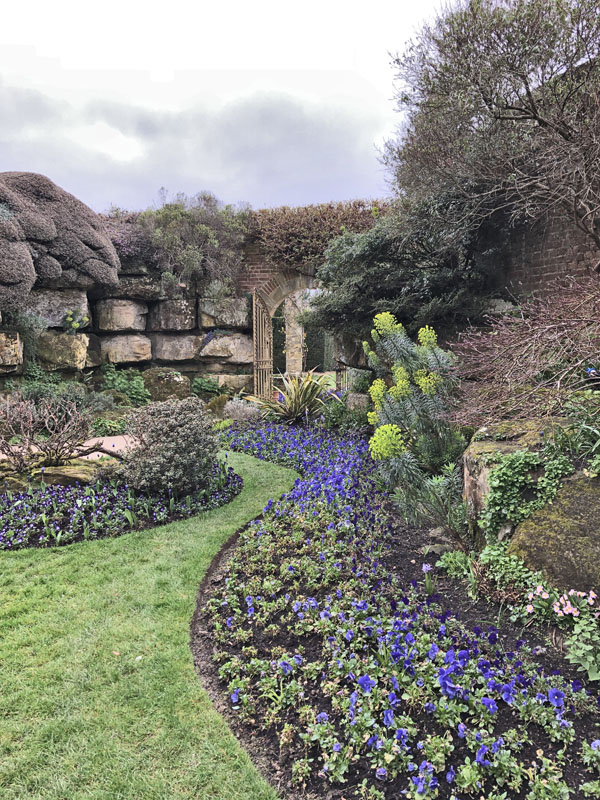 How to Get to Hever Castle:

From London
If you’re staying in London, take a taxi, tube or train to London Bridge rail station. There’s a tube and a rail station at London Bridge, you want RAIL.
Direct service runs to Hever station approximately once an hour and the journey takes 50 minutes each way. The cost of a round trip ticket is under $13. (You can also get this same train line from East Croydon rail station) If in doubt, look for the end destination of this line to be UCKFIELD.

From Southern England
If you’re staying in Brighton or on the south east coast of England without a car, you’ll have to take the Regency bus (No.28, 29) or a taxi to Uckfield rail station. From Uckfield to Hever the journey will take about 30 minutes and a round trip ticket is under $9.

From Gatwick or Heathrow Airport
If you’re driving from Gatwick Airport, allow 40 minutes each way depending on traffic. From Heathrow or Brighton allow a little over an hour.

Directions from Hever Train Station:
If you take the train to Hever, you’ll have two options to get to the castle. Walk, through fields or by road or hire a taxi.

Walking – Depending on the weather, walking can be quite nice if you don’t mind a few muddy fields and have the time. Look for the signs as you come out of the station and follow the red and white striped posts. You’ll walk out of the station (which is unmanned) and look for this sign. 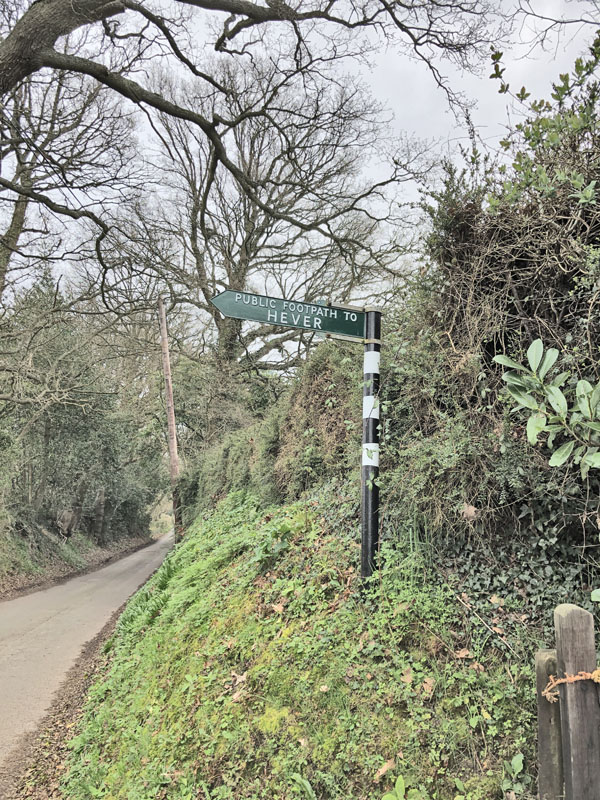 Turn left into the narrow path next to the field and keep walking, looking out for the red and white posts as below. You’ll walk along a path and then through several largish fields. 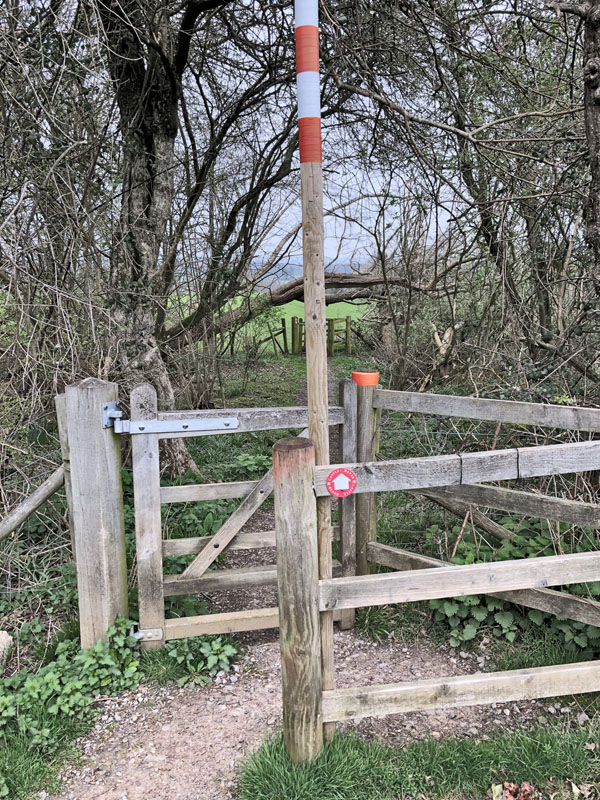 Keep on going until you meet up with the road. You’ll see this sign once you come out of the fields and then you’ll turn left to walk along the road up to Hever Castle.

Or if you want to stick to the road instead of the paths, you’ll turn left on the road at the first sign above coming out of the station. Essentially you’ll be walking around the fields by road. This route takes a little longer on foot. Be sure to watch out for cars whizzing by.

Taxi – You’ll need to call ahead for a taxi to meet you at the station as there are no taxi ranks at Hever station. Another alternative is to get off at Edenbridge station the one before Hever as it does have taxis nearby. Either way to be safe, call Relyon taxis at 01732 863800, Edenbridge Taxis 01732 759 821 or Edenbridge Cars 01732 864 009 to book ahead of time. Don’t have a UK phone? Book online. Don’t forget to arrange for the taxi to pick you up when you’re ready to leave the castle.

The main season starts on March 31 in 2019 and goes until January 1. Be sure to check dates and times before you go. If you like to book ahead and buy tickets online so much the better. We popped in on March 22 without checking, so I’m happy they were open! Be aware the castle doesn’t open until noon. Check their very comprehensive website for details on ticket times and dates as well as directions.

I know you’ll appreciate Hever Castle as much as I did. It’s smaller than I expected but cozy and brimming with history and gorgeous detail. The gardens alone are worth a visit especially if you’re visiting during spring and summer!

Ready for a tailor made trip or a guide to living in England for 6 months? 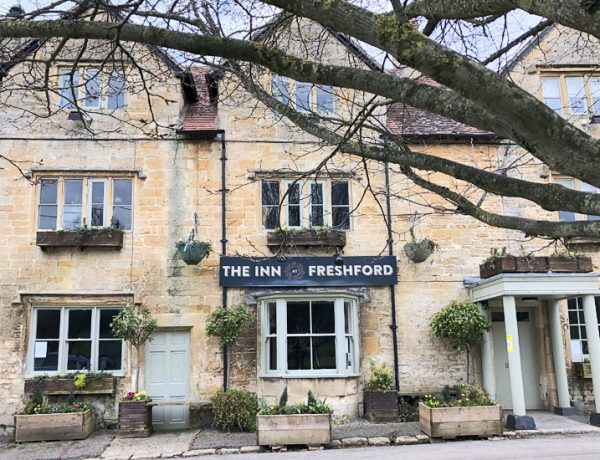 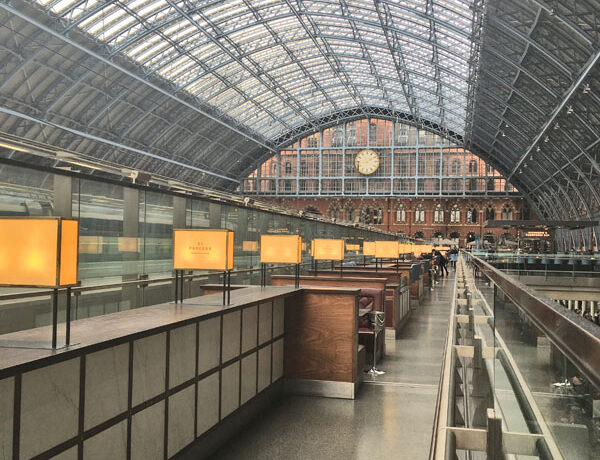 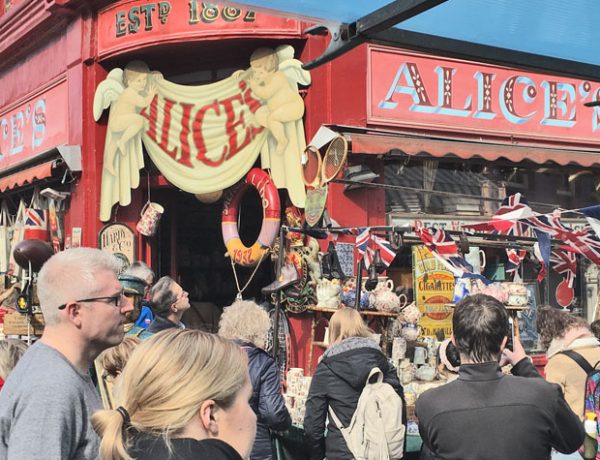 Reasons Why You Shouldn't Settle in Love

Here's Why Living Apart Together May Be Right For You