Perfect Guide to Bath – What to See and Do

When they discovered it’s therapeutic thermal springs in 75AD, the Romans put Bath on the map. Today the city is a World Heritage site best known for it’s stunning Georgian architecture, Roman baths and cultural panache.

Romans built a religious temple and the Roman Baths – Aquae Sulis – over naturally occurring hot springs. Although swimming in the original baths has been banned since 1978, you can still visit the site where bathing and socializing took place 2000 years ago.  By the 5th century, when Roman rule in Britain ended, the baths became a ruin and were left undiscovered until 1878. By 1897 after extensive excavation and renovation they were in use once again.

During the Georgian era, bathing in the thermal waters was considered a restorative and curative pastime. The wealthy and elite flocked to the city and Bath became renown as the ultimate spa resort!

As you may know the novelist Jane Austen lived here during King George IVs’ reign, know as the Regency period. She stayed in Bath for the first time in 1797 and returned in 1799.

Whether you’re a Jane Austen fan, lover of Georgian architecture or looking for the perfect English town to visit on a quick hop trip, Bath won’t disappoint. Where else can you have afternoon tea, visit the home of Jane Austen and dip into a world class thermal spa all in one place!

It’s easy to make Bath a day trip from London. Here’s how.

One of the  best ways to get to Bath is by train. Bath is one of those towns that is extremely walkable and the train station is right in the center of town. Traffic can easily get snarled and parking can be expensive so consider leaving the car at home.

London to Bath Spa – Fast non stop trains from London Waterloo and London Paddington station leave London for Bath about every half hour and the journey takes 1 1/2 to 2 1/2 hours depending on the train you catch. Book up to 12 weeks in advance for the best pricing. My advice? Don’t travel on Sundays! 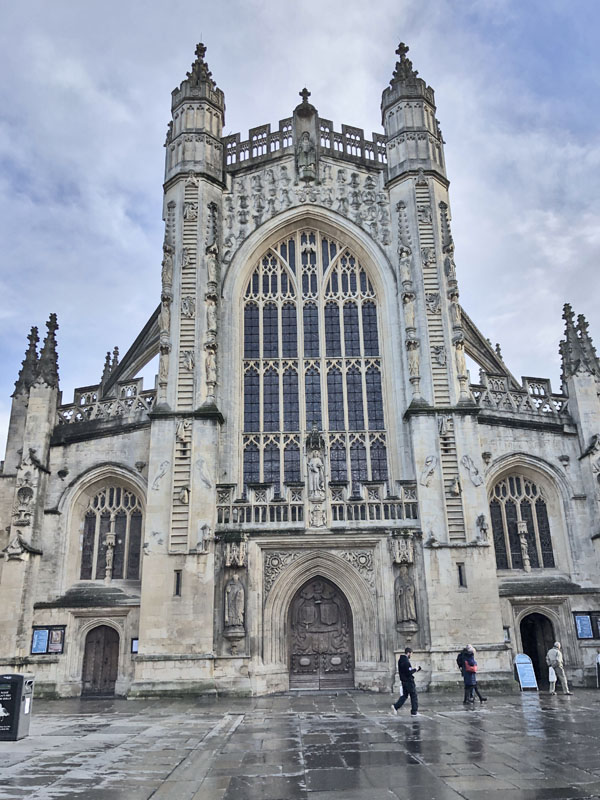 Guide to Bath – Must See’s on a Day Trip

Fortunately Bath is quite compact and very easy to walk around. All of these sites are within 15 minutes walk of the train station.

Tour the remains of one of the worlds oldest spas and walk in Roman footsteps. The Baths are no longer in use as a spa but are worth visiting to soak up the history of the Roman occupation.

Visit this living and active church built in 1599AD which is a place of prayer for all. Climb the 212 narrow stone steps to the top of the Abbey on a Tower tour to get a guided “behind the scenes” look at the church as well as take in incredible views over Bath.  Not ready to climb? Light a candle for a loved one and enjoy the peace inside the abbey.

No admission fee for general admittance but donations are appreciated. Find fees for individual tours here.

Step back in time at No. 1 Royal Crescent a restored Georgian townhouse on the Royal Crescent. Immerse yourself in this capsule of what daily life was like during Jane Austen’s time.

No 1 Royal Crescent is the first townhouse on the Royal Crescent, an iconic landmark of 30 terraced homes built between 1767 and 1774. The house at No 16 is a hotel and all the others are privately owned. Initially called The Crescent, Royal was added at the end of the 18th century after Prince Frederick stayed there. He later bought No. 16.

Booking tickets to No 1 Royal Crescent

Just 5 minutes from the Royal Crescent is another architectural landmark. The Circus was also designed by John Wood and completed between 1754 and 1768. This row of townhouses forms a circle with three separate street entrances with a circular lawn in the center.

During WWII a German bomb demolished several of the homes but each has been sympathetically rebuilt . Although the architect was known to have designed the Circus to echo the circular shape of Stonehenge, there’s no mention of the obvious similarity to a Roman circus shape.

Pulteney Bridge was completed in 1774 by the Pulteney family who wanted access to the land they owned on the other side of the river. It’s one of only four bridges in the world featuring shops along the length of the bridge as well on both sides. The bridge is 148 ft long and 58 ft wide.

The Bridge Coffee Shop has spectacular views down the River Avon across the weir below.

Although the views aren’t particularly scenic, you can walk along the river on the south side – nearest the main city centre – by walking down into the Parade Gardens. There’s a small charge to enter the gardens. You can also cross over to the other side via Pulteney Bridge.

You can also access the River by crossing Pulteney Bridge. Look for the Riverside Walk sign next to the Map shop to the steps leading down to the riverfront. You’ll also find the Bath Rugby Club field here and several pubs and bars.

A small museum dedicated to the life of Jane Austen, the centre is a must stop if you’re an avid reader. Tucked away on a side street at 40 Gay St., the centre is a 10 minute walk from the Roman Baths. You’ll be sure to spot the statue of Jane outside and perhaps a gentlemen in character as well!

Although the centre does an excellent job of giving us a peek into Jane’s life, I find she remains as enigmatic as ever despite our best efforts to know her as well as we know her characters!

The guided tour, film and Jane Austen waxwork figure are lovingly recreated and the gift shop and tea room are also worth a visit.

Find out more about the centre and book tickets online.

The Hop on Hop off bus tour of Bath has two separate routes to give you a quick overview of the city and it’s main attractions. Pick up the bus  at the Grand Parade overlook to Pulteney Bridge opposite the Empire Hotel.

Of course Shopping is always a must when visiting Bath. Here’s my guide to shopping in Bath

Guide to Bath – Extras for a Weekend or Week Stay

Staying overnight or have a long weekend to spend with the girls? You’ll have more time for experiences like a spa day, cruise or mooch through the shops! Here’s a few additional stops you can add on your “what to do in Bath” list.

The Assembly Rooms were designed by John Wood in the late 18th century as an elegant venue for dancing and socializing. Now function rooms they serve as a reminder of how dedicated Regency society was to having fun! Run by the National Trust, you’ll also find a gift shop and cafe here. Free.

The Fashion Museum is in the floor below and a separate museum devoted to historical and contemporary fashion from the 1600s to today. Channel your inner fashion designer and dress up in replicas of period fashion! Open to any age. Buy tickets online.

Tapping into the same natural hot springs the Romans discovered, the Thermae Bath Spa is a public spa and bath facility just minutes from the Roman Baths. If you have two hours to spare, have a soak in the outdoor rooftop pool and take advantage of the Wellness Suite! Unless you’re reserving a treatment, tickets to the open spa can’t be reserved in advance. My recommendation is pick a weekday to avoid long wait times.

Across the way from the main spa is the Cross Bath, a smaller more intimate spa for up to 10 people. You can book up to 48 hours in advance.

On the other side of the River Avon, across Pulteney Bridge, board a vintage river cruiser ready to take you up the river for a tour or a pub lunch. Perfect on a sunny afternoon and a lovely way to see the city from the river. River Avon cruises and boat trips.

If you’d love to get outside Bath to see the surrounding countryside, then consider booking a private chauffeur driven tour. The Cotswolds boast some of the most beautiful and charming villages in England; with cottages built of golden natural stone and impossibly pretty. Let your driver do the driving so you can relax and enjoy the spectacular scenery. Perfect for a girls weekend! Chauffeur tours.

I first heard of The Bell Inn on a flight from Denver to London. It’s a quintessential British pub within 5 minutes walk of the Artisan Quarter on Walcot St just 15 minutes from the city centre. You may just rub elbows at the bar with one of its well known co-owners, Robert Plant of Led Zeppelin or Peter Gabriel!

Why not pop your other half on a stool so that you can take advantage of some of the wonderful boutiques and shopping districts just steps away.

Ready to put your feet up and see the latest feature film in style? This art deco themed boutique movie theatre has velvet love seats and individual table service. Not to mention a posh cafe and bar.

If you’ve been to the Jane Austen Centre and picked up the souvenir guide, you’ll find a map inside. Follow Jane’s footsteps around her favorite Bath haunts. See where the Austen family lived in Bath and where Jane may have visited family and friends.

If you’re an avid Austen follower, why not time your visit for the 10 day Jane Austen festival “celebrating all things Jane Austen”?

Look for my shopping recommendations here. 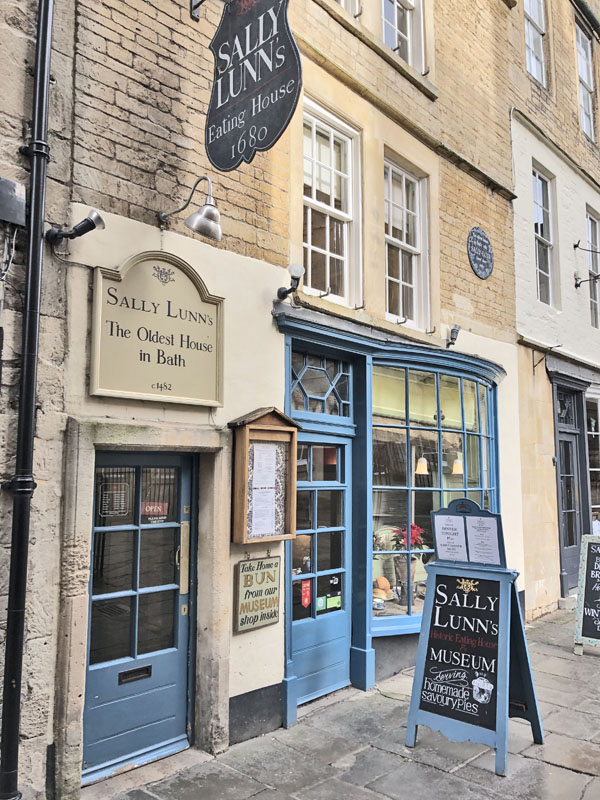 Where to Eat and Drink in Bath

Try No 15 Great Pulteney for eclectic charm, the Pump Room for refined elegance next to the Baths,  The Royal Crescent Hotel or The Bath Priory Hotel for a delicious memorable afternoon tea.

The Boater pub on Pulteney Bridge has a deck overlooking the River Avon.

Where to Stay in Bath

Bath is extremely popular with visitors from all over the world. My suggestion is try and visit during off season if you can;  November, December, January, February and March excluding school holidays. If your visit is planned during one of the warmer months, buy tickets online ahead of time to avoid lines. Early morning is the best time to see Bath with fewer crowds.

Places to Go in Dorset: 9 Must See Coastal Destinations